Skip to content
Google Map Something went wrong while retrieving your map.

We have resumed online-only services because of local COVID conditions

In the fall of 1954, Nat and Carol Sherman moved their family to Waynesboro from New Jersey. After discovering no Unitarian congregation in the area, they placed an ad in the newspaper inviting interested persons to contact them. A group of ten people began meeting every other week at the Hotel General Wayne on West Main Street. By June 1955, the group had been formally recognized by the American Unitarian Association. 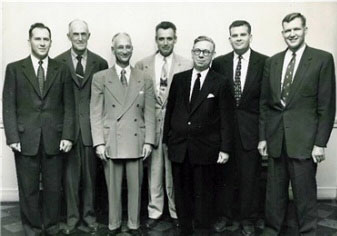 The tiny Fellowship continued to meet every other week for services led by Reverend Cheetham. The first years were difficult, but the group persevered despite coming to the brink of disbanding more than once. By 1964, the Fellowship was holding lay-led services every Sunday, had a children’s religious education program, and decided to purchase the Hall property at 565 Pine Avenue to serve as its future home.

At the time of its 30th anniversary celebration in 1985, the Fellowship had 54 members and attendance at Sunday services had clearly outgrown the meeting room. Thanks to the leadership and talent of Bill Berry, the current Fellowship Hall was completed in 1990. The new facility next door to the old one made it possible for UUFW to have have space for religious education programs and offices in the older building.

By 1993, the Fellowship was able to hire its first part-time minister, Reverend David McPherson. He challenged the congregation to seek a full-time minister in order to realize its potential as a focal point of liberal religion in the central Shenandoah Valley. Reverend Dr. Ed Piper became the first full-time minister of the Unitarian Universalist Fellowship of Waynesboro in 1997.